The actress said she used her platform to support the former reality star but since Tacha came out the house, she has been ignoring her. 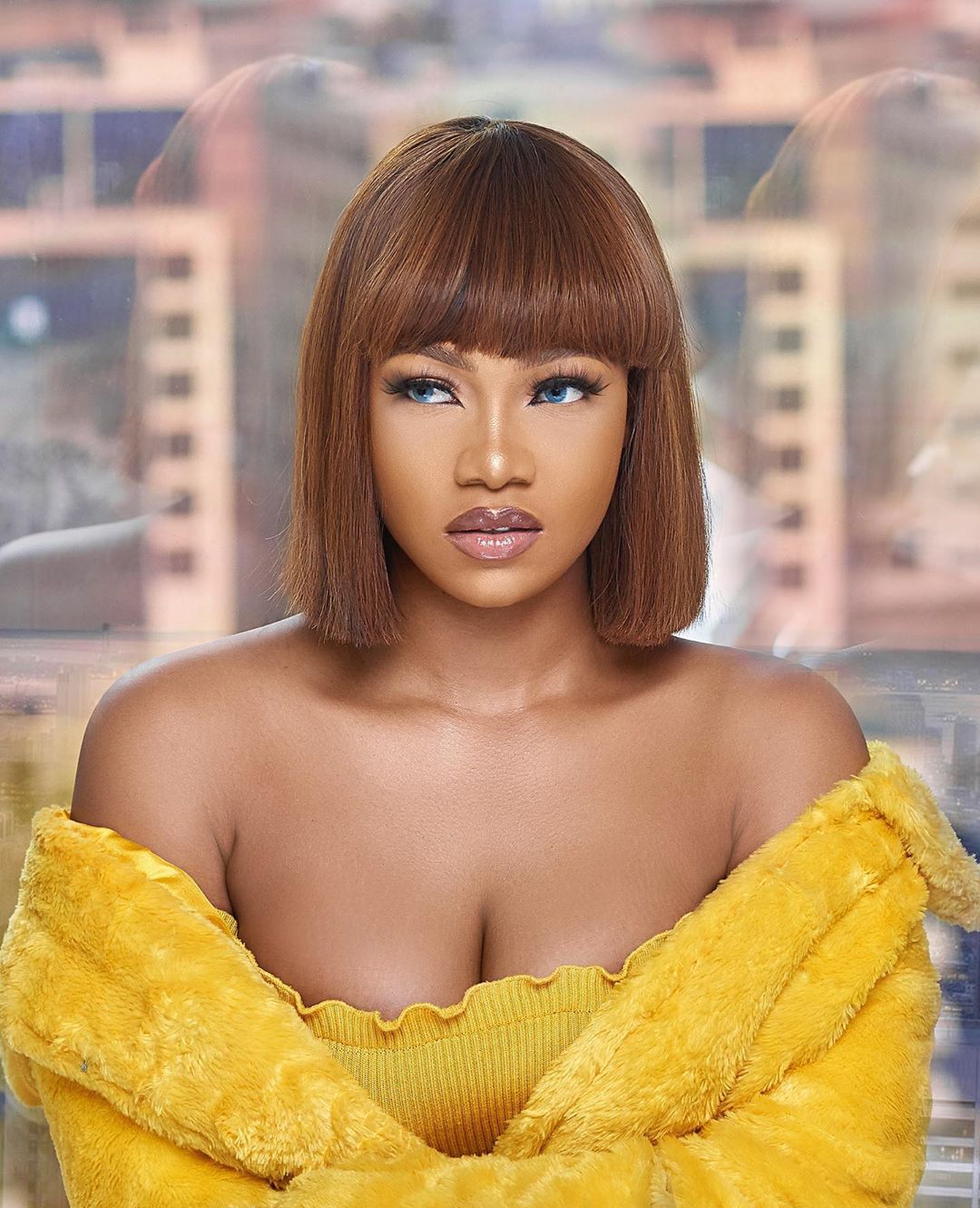 Tacha put up a post after she came out of the house to thank her supporters, including Peter Okoye, Bobrisky, Jaaruma, Angela Okorie and more. She tagged Angela twice to the post.

But Angela claims Tacha doesn’t reply her for days when she writes to her. She said that when Tacha replies, she directs her to her manager.

Calling Tacha out, Angela said Tacha’s action has made her understand why Jaaruma, her biggest supporter, unfollowed her. She went on to accuse Tacha of having a bad character.

This Right Here keeps me going

What Ever I do for people
I don’t expect A pay Back
And that is why God
Keeps blessing me
But as a human being
I think I deserve Gratitude.

Some people i helped like Tacha can’t even say
Thank you for giving her my platform
To push her Brand
As the matter of fact she ignores me ,
When I write her
It takes 2 days to reply me
Or she directs me to her manager
What an Ungrateful personality
Tacha it took you 2 weeks to call me after you
Left Big brother house,
That was After @hairess_gallery told u to call to at least say thank you,

Now I understand why Jaruma unfollowed you
Tacha I told you to post her picture publicly and
Say Thank you to her for all she did for you,
Cos is not easy to spend money on who doesn’t
Know u , Gratitude is important
I told you that “A good character will keep you in the industry for a long time”
But a bad character will make u loose everything
I was the First public face to post ur picture when you entered big brother house,

This alone can make me not to help anybody again,
But you know what??? I will keep helping people
Cos this is part of my work on Earth.
Called you for a shoot
And I was shocked u said u will post it for free
Forgetting I post u on my page 2/47 without u paying a Dine

I pleaded with my lovely fans on daily basis to keep Voting for you until you win
I lost lots of fans cos of you
Some even wrote me messages threatening me
For supporting you , ”
I told them I saw something different they can’t see in you.

Even when everyone was against you
I supported you till the end and also gave them
Reasons to support you,

Gratitude is very Important
Gratitude is a Must
Does it mean if you were Angela Okorie
You won’t give me same opportunity I gave you????
Desist from being Ungrateful to people who
Helped you when u were a nobody
Else it will Ruin You forever
NB: Gratitude is everything
Morning world.
#Epaindem 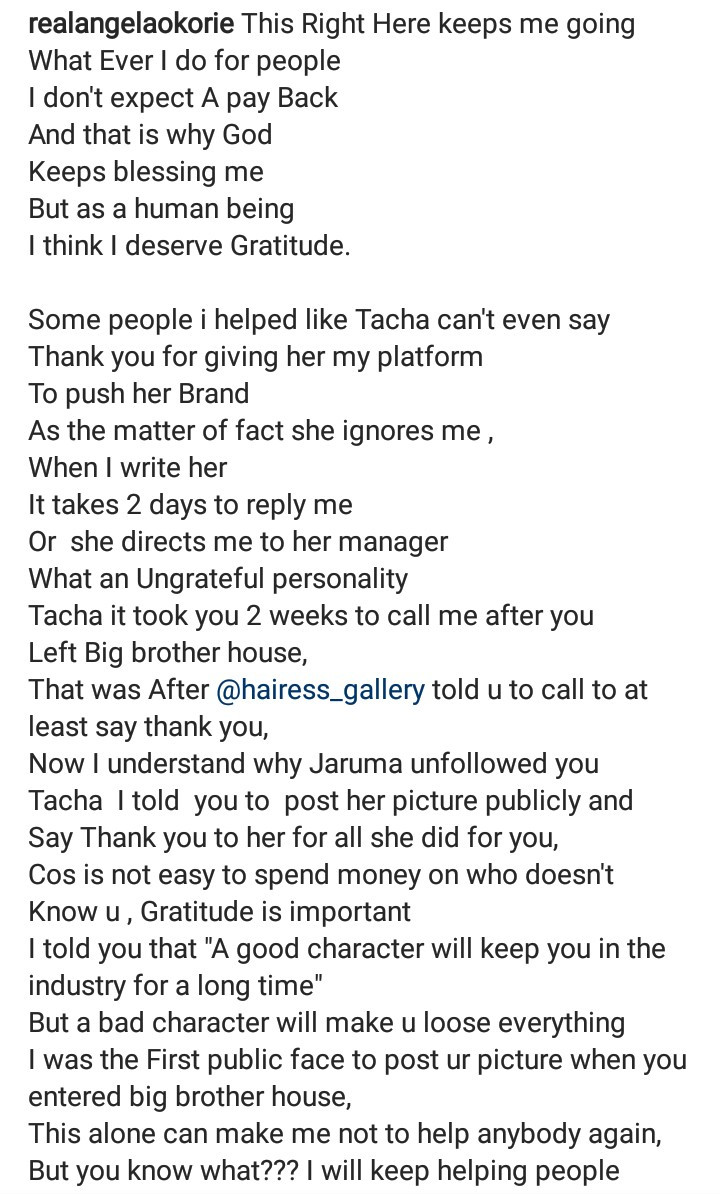 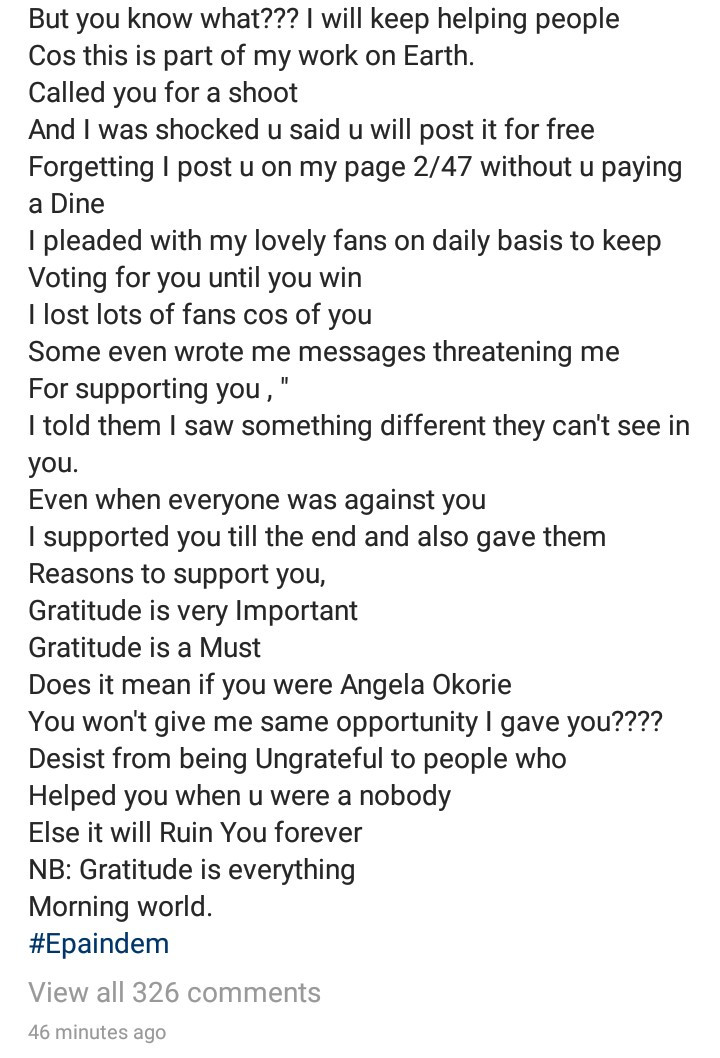