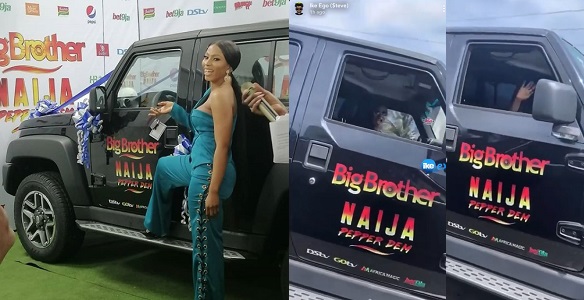 Big Brother Naija season 4 winner, Mercy Eke was spotted by her beau, Ike in Lagos cruising in the N27m Innoson G40 SUV she won as part of her prize.

Fellow housemate and lover, Ike Onyeama posted the video on his social media account, which he recorded from his car.

The BBNaija winner was recently dragged online for posting a live video she made, in the video Mercy was quite agitated over how people have been bothering her and asking her to pick a favourite.

She was seen telling those who it may concern, to leave her alone… that she’ll do whatever it is that she want whenever she wants.

The video didn’t go down well with fans of the show as they called her out for not having time for a show that brought her to limelight. (Read Here)