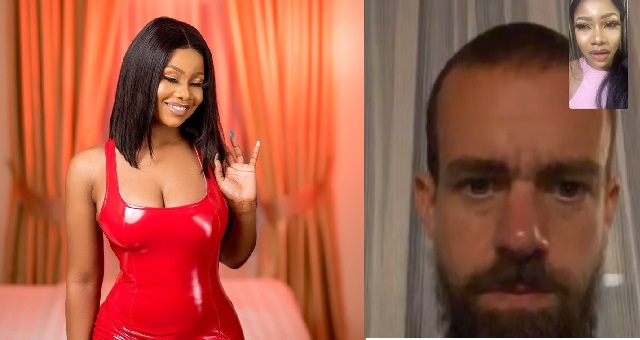 Earlier today, reality TV star, Tacha, shared a video of herself on a ‘video call’ with twitter CEO, Jack Dorsey who was in Lagos Nigeria recently.

She shared the video to wish the Tech guru a happy birthday.

When her fans saw the post, their bragging rights increased by a significant magnitude because their queen’s popularity was becoming a worldwide affair.

However, some social media users have come out to disprove Tacha’s video call, saying she deceived the public with a sophisticated app and she did it for clout.

Another user also shared a fake video call with Rihanna to justify the claim.

Tacha you’re the Queen of Audio, while mercy is the Queen of Highlight…😂😂Only Tacha can do an Audio in video😂😂 I don’t even know wat I’m saying😎😎 Audio video call with jack,.. Audio Governor,.. Audio bigger than BB,.. Audio twinny……Tacha is a boy #MercyTheBossChick pic.twitter.com/f9pGDm6Pq7