Governor Babajide Sanwo-Olu was spotted in a viral video performing a ‘leg shake’ with Deputy Governor Obafemi Hamzat, during visit to Infectious Disease Hospital where the Italian man confirmed to have the deadly coronavirus is being isolated. 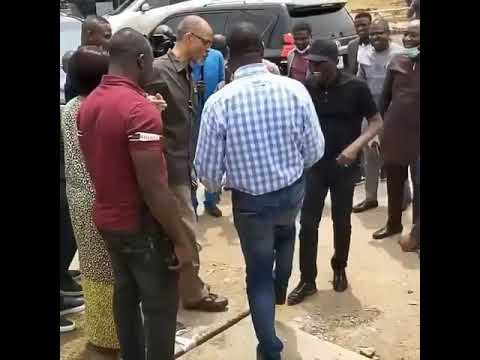 In a video shared on Twitter by Jubril Gawat who is a senior special assistant on new media to the Lagos State Governor, Sanwo-Olu and Hamzat were spotted performing a leg shake as citizens have been advised to restrict touches.

The Lagos State Governor who spoke at the facility after sessions of handwashing and inspection, said;

“A few people have given very wrong information as to what this place looks like.

“It’s a well put together infrastructure as against what has been wrongly reported and sent out on social media and even some print media.

“Even from the external component of the facility, we can see that it’s ready for eventualities and all of the things that we’re talking about.”