The Abuja taxi driver, one Emmanuel Imhoudu who stripped naked to resist arrest after his vehicle was impounded by security operatives, has been dished a 6 months jail sentence for violating the lockdown order issued by the federal government. 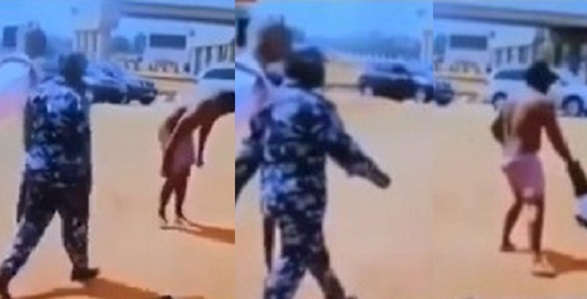 It was reported earlier that the driver who defied the stay-at-home directive on Monday April 13, protested the seizure of his car by the FCT COVID-19 Joint Task Force Team, saying he had a family to feed and could not cope with sitting at home.

He was heard saying in a viral video;

“I no dey provoke. I be Edo boy. I get children. I get wife. Na money I dey find, money to chop. No money. You tell us to stay for us. Nothing. No food.”

However following his arraignment before an Abuja Magistrate court on three count charges, the taxi driver was handed a 6 months jail sentence (two months for each count) with an option of N10,000 fine.

Emmanuel Imhoudu was also directed to make a public apology on any television network, an option an eyewitness said he chose.