An elderly woman was filmed cleaning up a street in Surulere, Lagos state after it was left in a mess by looters. 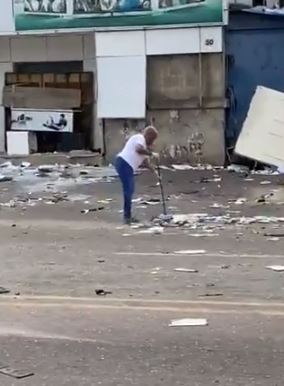 The #EndSARS protest was hijacked by hoodlums, who vandalized and looted stores of innocent citizens in Lagos and other parts of Nigeria. This resulted in the imposition of curfew in some states, however the thugs still continued their barbaric act.

A video of the almost-deserted street shows wastes littered all over the floor, with only a few people on the quiet street.

In the video, an elderly woman is seen with gloves and a broom, sweeping the street.

Her daughter with twitter handle, @derinola shared the video of her mother doing the Lord’s work and wrote,

Meanwhile my mum took our neighborhood in surulere today and decided to clean up the streets after all looting ❤️❤️❤️ pic.twitter.com/DXxGFnoACv

Moments later, she shared another video and said several other people came out to assist in cleaning after seeing her tweet.

Fisayo walked from his house so did @gentsoflagos .. Made new friends.. Thank you guys for coming ❤️ pic.twitter.com/kAYiC6lem2

Twitter users have commended the woman for her hard work and sacrifice.

Read Also:  Billionaire blogger, Linda Ikeji reveals the reason she is yet to undergo plastic surgery