An Ex-Oyo court registrar, Mutiat Omobola Adio has been sentenced to 5 years in prison for stealing N22.3 million meant for judicial officers’ Cooperative society in the state. 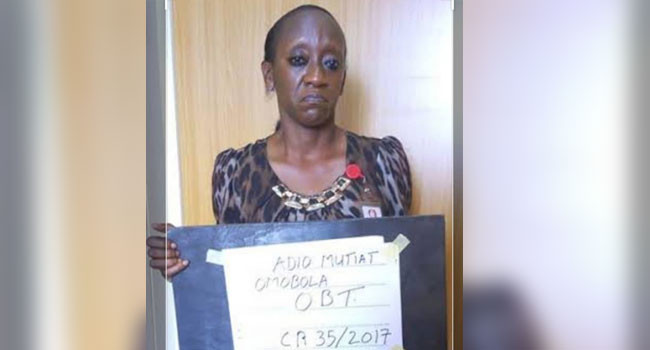 Adio was convicted after being arraigned in court by the Economic and Financial Crimes Commission on a one count charge bordering on stealing.

EFCC’s spokesperson, Tony Orilade told newsmen that it was the “second time in less than two years that the former top government official would earn jail term for fraud-related offences.”

The convict was “accused of stealing a sum of N22,375,913 (Twenty Two Million, Three Hundred and Seventy-Five Thousand, Nine Hundred and Thirteen Naira), from Guaranty Trust Bank Plc, an offence that runs contrary to section 390(11) of Criminal Code, Cap.38, Law of Oyo State.”

She reportedly “abused her office as the secretary of a Cooperative Society of the Oyo State Judicial Officers by inflating the total sum approved for loan facilities granted her members by GTBank and converting the difference to personal use. She was said to be the facilitator of the loan which totaled about N90 million.”

It was also gathered that she was “sentenced to seven years imprisonment in 2018 for obtaining under false pretense the sum of N9.2 million from one Abiodun Olonade, a Nigerian resident in Ireland. The sentencing was without an option of fine.”