A 17-year-old girl, identified simply as Ayisat, has been declared missing after she was allegedly swept away by a flood in Lagos.

The flood, resulting from the heavy downpour in Lagos on Monday, June 22, swept the teenager away in Surulere. 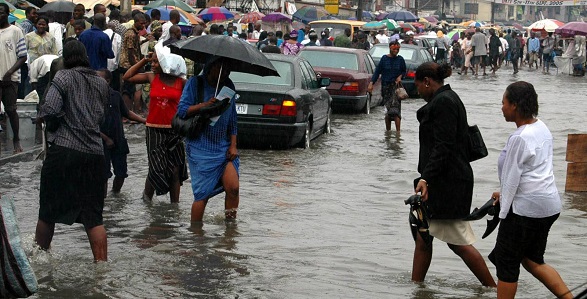 Head of Public Affairs, LASEMA, Nosa Okunbor in the statement, said the agency had already commenced a search and rescue operation for the missing girl.

He explained that major and minor drains and drainage canals in and around the Alapafuja axis of Surulere are being searched for the missing teenager.

“Upon arrival at the scene of incident, it was discovered that the canal along Alapafuja close linking Bank Olemoh was submerged as a result of flooding and a teenage girl named Ayisat was swept away by the flood around 12:30p.m (Monday).

“The search and rescue operation by the agency which commenced immediately the distress alert was received, has led to the ongoing thorough search of all major and minor categories of drains and drainage canals in and around Alapafuja axis of the Surulere Low-Cost Housing Estate in Surulere Local Government Area, Lagos.

“Outcome of the present operation will determine the extent to which the radius of the Search and Rescue operation will be extended beyond the immediate locality of Surulere to other Local Governments/Local Council Development areas trailing the water/flood flow, as past experience has proven that strong floods have been known to transfer victims far from incident scenes.”

Mr Okunbor added that the body of the missing teenager has not been found even when the LASEMA Response Team searched through the adjoining canals. He said the operation will be suspended till Tuesday morning.

Read Also:  ”Dear Nigerians, i know many of you are angry… we are sorry” – Vice President, Yemi Osibanjo.