A Twitter user with handle @faizah__utc, took to the platform to narrate how her best friend of 15 years committed suicide because of a man.

According to @faizah__utc, herself and her bestie were caught up in a love triangle as they’d fallen in love with the same man but the man choose Faizah over her friend.

Faizah then said her best friend became obsessed over the man and this made them to loose communication for over 2 weeks.

However, she later find out that her best friend had committed suicide.

“This girl has been my bestfriend for over 15years and unfortunately we fell in love with the same man and that man loves me not her but she was already obsessed over him so we fought and stopped talking for over 2weeks now and she committed suicide today”, she tweeted. 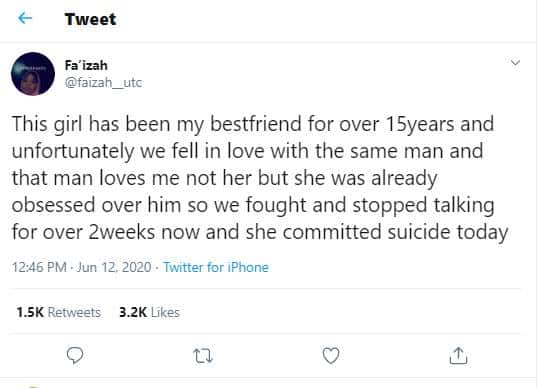