General Overseer of The Redeemed Christian Church of God, Pastor Enoch Adeboye has advised Christians to pay their tithes in full. 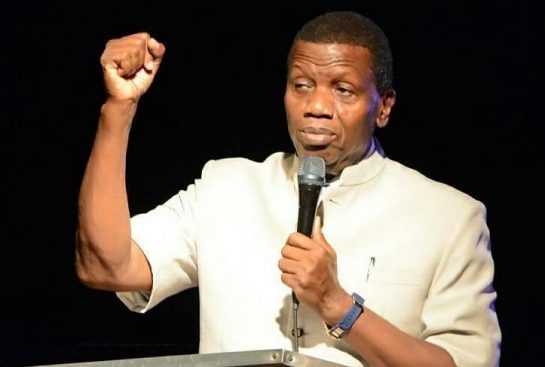 Reiterating the message on tithing, the general overseer of the Redeemed Christian Church of God (RCCG), Pastor Enoch Adeboye, said that paying less than one’s tithe is deception. He noted that it was better that such a person did not pay it at all.

The man of God made this statement through his official Instagram page.

According to him, it is impossible to deceive God because He knows all things.

The RCCG pastor shared some bible verses to buttress his point, noting that no one should attempt to deceive God.

Pastor Adeboye then proceeded to share the story of a man who joined the church many years ago under the pretence of a hardworking person.

According to the pastor, God told him that the man was a spy and was operating from the church so that he would not be easily discovered.

The RCCG pastor said he confronted and told the man that he would be exposed. According to him, the man was picked by the then military government of Nigeria within seven days.

The man of God said that deceiving God had grave consequences. He called for the repentance of people who may be guilty about the issue.

It is impossible to deceive God because He knows ALL things, including the thoughts of your heart and the motives behind your actions.
In Samuel 15:13-15 for example, King Saul told Samuel that he had already obeyed God’s commandments as regards the Amalekites.
However, the latter heard the noise of animals. The King then lied that they were for sacrifice to God.
Why would anyone try to deceive God? In the first place, he should have asked himself if oxen sound differently for the Prophet to know which is from Amalek and which is not. He should have known that Samuel was acting based on divine knowledge. You can’t hide anything from God!
Ananias and Sapphira lied to the Holy Spirit and never got a chance to repent (Acts 5:1-11). They would not have died if they had simply been honest about how much they sold the land for and how much they kept back. They were not forced to sell; they just wanted to deceive the Holy Spirit and they paid dearly for it. Do not attempt to deceive God.
Many years ago, when the Redeemed Christian Church of God was small, one man joined us and became very active almost immediately. In fact, we thought he was a blessing until God revealed his true identity. I was on a lengthy fast when he came to see me. There and then, God told me he was a spy, operating from the church so he would not be easily found
I confronted him and he tried to cover up. I told him he wouldn’t last beyond the next seven days. Within the week, God exposed him and he was picked by the then military government of Nigeria. God cannot be deceived. Paying less than your tithe is deception to God; it would have been better if you didn’t pay it at all.
Telling a lie to the marriage counsellor in your Church that you and your fiancee/fiance have not had any sexual relations before marriage is trying to deceive God. As an usher, changing the remittance figures is trying to deceive God. It is dangerous and thus, has grave consequences. Don’t do it.
Is there any area where you have been trying to deceive God? Repent now. 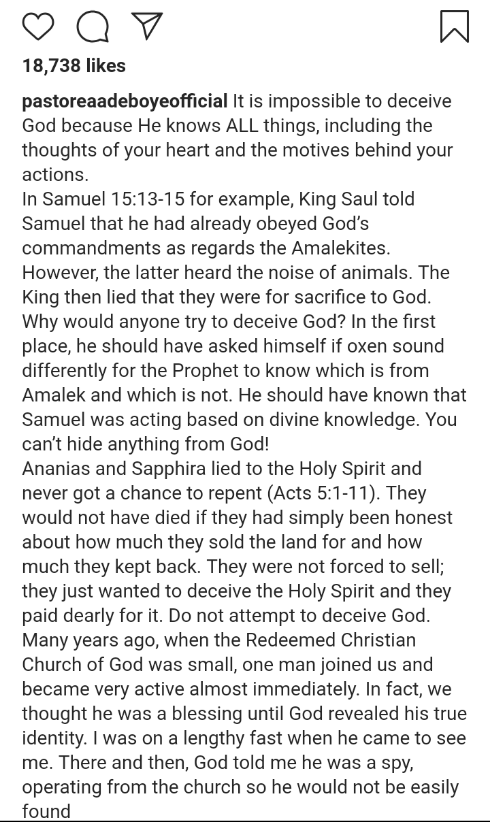 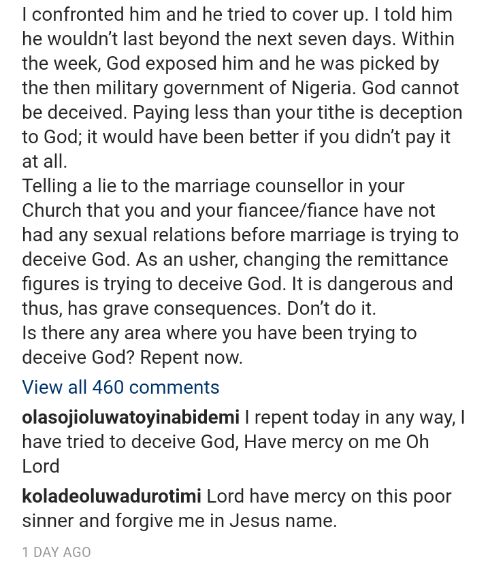 Read Also:  Nigerian comedian, Mr Macaroni reveals the four universities he went to in 10 years to get a degree
Please Share this: