A young lady has revealed that she rejected rich men who were proposing marriage to her because of her mum’s advice.

The 24 year old said that her mum told her before passing away, that a man would appreciate a woman more if she builds with him and this has been the young lady’s guiding principle while searching for a partner.

She said that rich men have been proposing marriage to her, but she turned all of them down because they are wealthy. Going further, she opened up about her 8 month-long relationship with a man who proposed to her but the only problem that’s preventing her from accepting, is because he’s rich and she wants to marry a poor man.

Read the full details below:

Read Also:  “I did it daddy” – Lady presents 2 degrees she bagged to her late father at his grave (Photos) 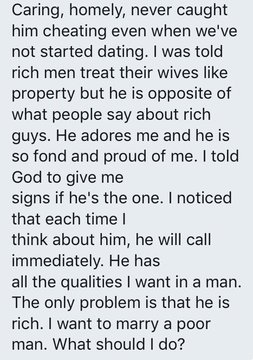