28-year-old Oyesanwo Sola has been arrested by men of the Ikorodu police division, Lagos state police command, for allegedly defiling a 15-year-old girl inside his shop in Ikorodu, a surburb in the state. 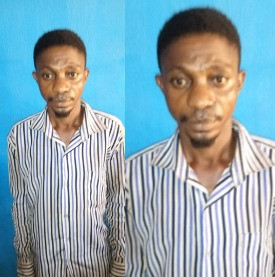 A statement released by the spokesperson of the state police command, Bala Elkana, says the father of the victim approached the Ikorodu police division on Friday March 13th to report a case of defilement, The father alleged that Sola defiled his daughter by inserting his finger into her vagina inside his shop along Ota Ona Itamaga road.

Bala said the victim was taken to the hospital for medical treatment and forensic examination. The suspect was arrested and has confessed to committing the crime.

Bala said the state Commissioner of Police, CP Hakeem Odumosu psc, has ordered the immediate transfer of all the cases to the State Criminal Investigation Department, Yaba for discreet investigation and diligent prosecution.