A Nigerian man is being hailed as a “good man” after he returned 100,000 Naira that fell from a woman’s bag while she was on a bike in Anambra state. 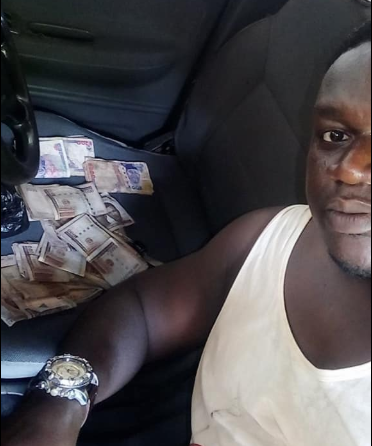 Kimberly Ezeike narrated how he was driving when he saw a bike rider speed past him with a passenger. Almost immediately, a nylon fell from the bike, and he said he picked it up and noticed it was money.

The following day being a market day in his town, he went to the market, making inquiries about the bike guy, who then later directed him to the woman who owns the money.

He said the woman was so grateful that she tried to reward him for his kindness but he wouldn’t accept any reward because he did it for God.

Facebook users have left comments to praise him and call him a good man.

Narrating what transpired, Kimberly wrote: “I don’t Know that people will still be careless with money at this point of hunger and poverty in Nigeria.

“Yesterday 20th April I was driving home in my country-side, when a bike (okada man) passed me, not up to a pole I saw a black nilon that have a small opening, I then saw few 1k note, I stopped and picked it up. Then when I got home I opened it and counted it, it was 100,000 naira.

“Because yesterday was my town’s Market day (Nkwo Igbo) and these women do not know what is lockdown. Tho I do see the bike man but don’t really know his name,his number or where he is from. I started looking for him describing to people who I am looking for, until someone who knows me gave me his phone number.

“I called and ask him few questions he told me that, the woman he was carrying at that time, is his customer he called her (mama Ebube or Mama Semi) that she deals on red oil by gallons. He further said that she was looking for her money and ordered him to take her back to her town Ekwulobia, to check if she left it there . I said to him to give her my number. He said why? I told him that I picked some money after they overtake me in the morning and no one is coming from front or back, so I guessed she is the owner.

“Not up to 5 minutes I started receiving calls from different numbers. I told them to come to Our Lady of Fatima Church and call me. In less than 30 minutes she, her husband, 2 of her neighbors and 2 more people came.

“So when I went there after much verification questions again as I did on phone earlier, her answers were very accurate on how the money was kept and set by denominations, I handed the money over to her, she busted in tears and gave me 5k I said no do not worry. She gave me the whole money and said, “take how much you think that is good”…… I said to her, please ma I do not need any reward, what I did is for God.
She started shouting and singing and her shouting started attracting passers by, I left.

“This is a very critical time for every common Nigerian. But do not let the condition change who you are or what you decide in life. always believe that yours will come in a more better way, because the best will come with tomorrow.” 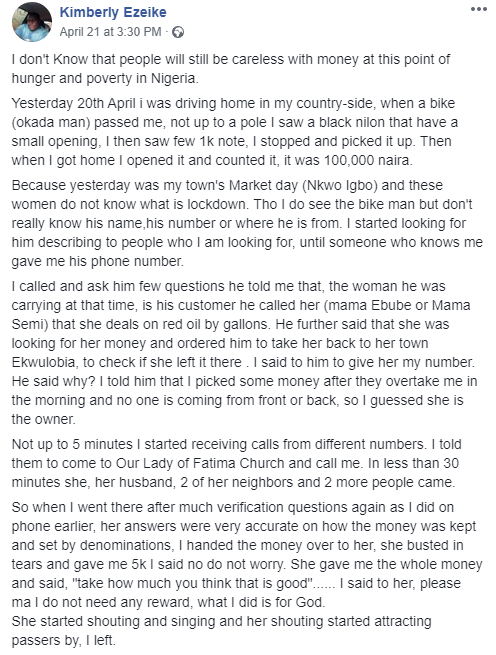 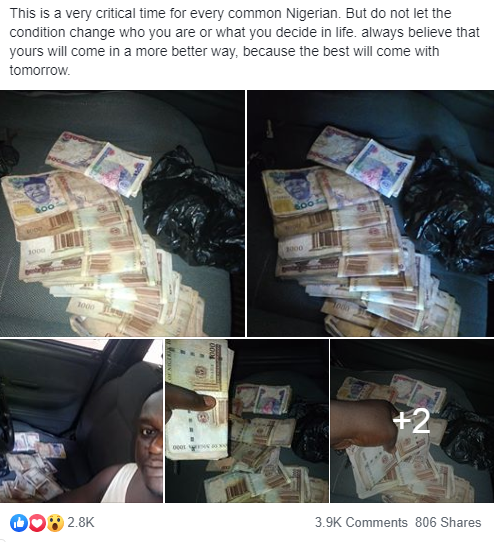 Read Also:  “I charge N10million and above for runs” – Bobrisky notifies potential clients
Please Share this: