The Police in Peru on Sunday arrested a Chinese citizen for illegally conducting rapid COVID-19 tests on the public with newly-delivered kits which were stolen from Peru’s health ministry. 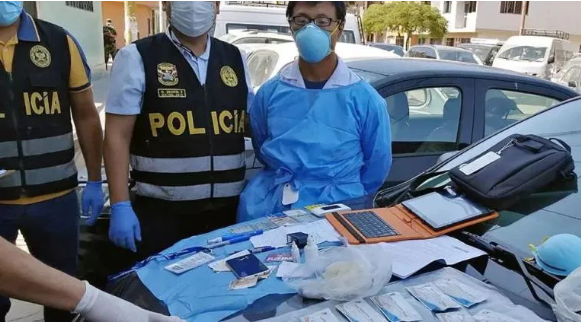 Tianxing Zhang, 36, was apprehended in the Brena district of Lima as he was about to take samples from two women at the door of their house, police said.

He “was proceeding to carry out rapid tests for COVID-19 with kits that he had stolen” from the Lima Sur health authority where he worked, according to a police statement.

Zhang was wearing a mask and a light blue medical apron at the time of his arrest by the state security police. Both women had paid him to carry out a rapid home test, without health ministry approval.

“When questioned, he acknowledged he was not authorized to carry out this rapid test and that the Rapid Diagnostic Tests had been stolen from the Directorate of Integrated Health Network of Lima Sur where he had worked,” the police said.

According to the police, the bespectacled Zhang confessed to stealing two batches of the test to use, for monetary gain, on people who suspected they were ill with the coronavirus.

Police found a backpack with 25 COVID-19 tests and other medical supplies at his home, according to AFP.