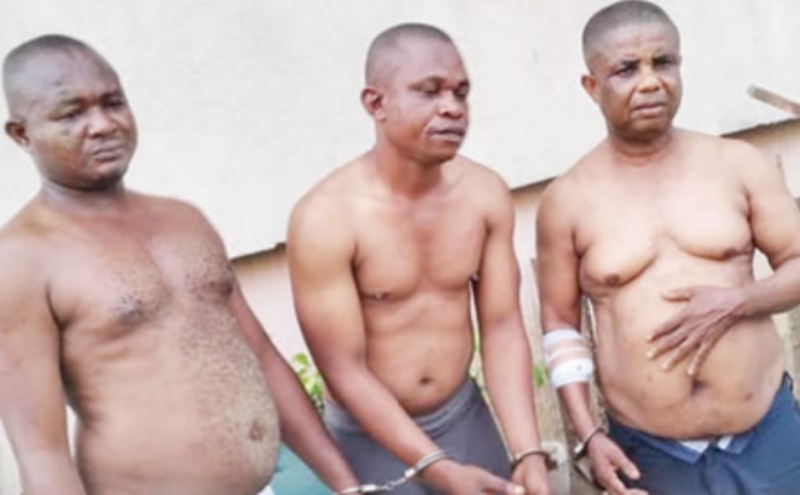 The suspects were arrested on Wednesday, March 18 when they attempted to rob a Bank customer on Calabar Road.

According to report, the victim raised alarm which drew the attention of the public and the suspects were eventually arrested by the police.

The state Commissioner of Police, Mr Nkereuwem Akpan while briefing journalists disclosed that operatives of the Anti-Cultism and Kidnapping Squad of the command arrested the suspects.

He added that they have confessed to the crime.

While narrating how they operate, Akpan revealed that the men stay close to banks, scoping people going in to carry out transactions or to use the ATM. After the unsuspecting customer is done withdrawing money from the ATM, the men will trail the customer and rob them.

One of the suspects identified as Ifeanyi Ebama said he was arrested after breaking the glass of his victim’s car in an attempt to steal the money the victim wrapped in a nylon bag.

However, the victim screamed and he was arrested alongside his accomplices who were waiting for him in their getaway car.

He added: “We normally park our vehicle close to the First Bank on Calabar Road and monitor customers, who come out with huge sums of money, either in nylon bags or big envelopes. We have been in the business for three months now. I want to beg the police to forgive us.”

The command recovered from the suspects a Toyota Sienna vehicle and a rod used in opening car doors and breaking glasses.

Akpan said the suspects will be charged to court once investigation is concluded.