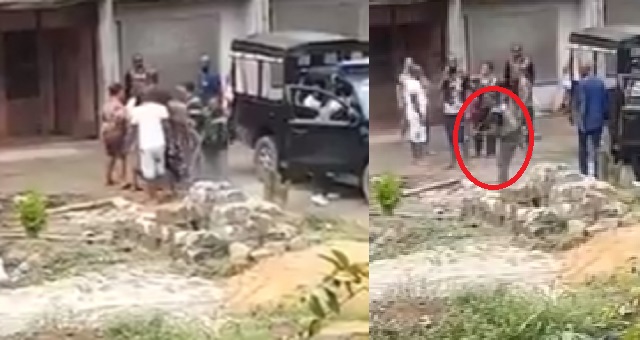 A video currently making the rounds on social media showed the moment a trigger happy Police Officer fired his rifle sporadically at the house of a someone they wanted to arrest.

According to reports, the arrest was unwarranted and so the people hesitated on getting into the Police Vehicle.

In a bid to thwart the resistance, the police man fired three shots into the ground right in the presence of the unharmed civilians at the scene.

Here are some reactions from social media users…

That bullet could have ricocheted and hit someone.
That was no crowd control. If something had happened, he would have changed the story to resisting arrest and complicated someone’s life.

He is a VERY stupid Man and should be investigated.

Barbarism and unprofessionalism at its finest here.

No one can tell me this guy is mentally stable.

These civilians are the wisest, no one panicked and ran because this particular idiotic policeman would have shot at anyone running. Someday soon, reckoning would come hard on these rogue police and their masters.