Nigerian Singer, Solid Star, is currently thanking God for his life after he almost lost it as he overdosed on drugs.

The singer reflected on the thin line between life and death and admitted that he’s a very fragile person.

There is a thin line between life and deaths.

The incident that happened few days ago showed how fragile i am by the overdose usage of drugs that led to me bleeding in an attempt o a couple thought process. 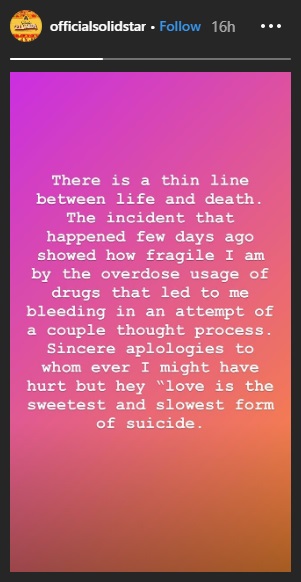 Read Also:  ‘By the end of the coronavirus quarantine, a lot of marriages will be over as 80% of husbands don’t want sex with their wives anymore’ – Joro Olumofin says
Please Share this: