Blockbusting Sugar Rush Movie, which just hit the cinemas this past Christmas has reportedly been banned from being shown across Nigerian cinemas.

The movie which stars some of Nollywood’s finest acts, like Bimbo Ademoye, Bisola Aiyeola, Adesua Etomi-Wellington, Tobi Bakre, Omoni Oboli, Williams Uchemba and others is said to have been banned due to a peculiar reason.

A reliable source informed us that the ban is temporary and it should be back up in cinemas in a really short while.

Though there are speculations as to why the movie was temporarily banned across the Nigerian cinemas. 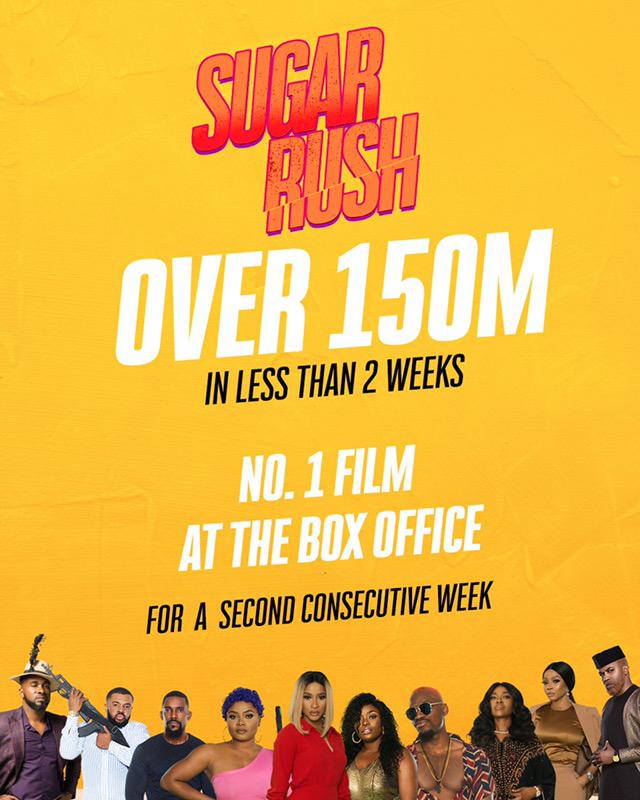 As at the time of filing this report, no cinema has showtime for airing this movie which strongly proves that it has been banned.

The movie also grossed in a whooping N150m in less than two weeks of its release and became the No. 1 film at the box office for weeks.

UPDATED: The National Film and Video Censors Board (NFVCB) has ordered that the screening of ‘Sugar Rush’ in cinemas be halted.

In a statement released on its Facebook page, the board said the temporary approval given for the movie exhibition has expired.

“It has come to our notice that #BringBackSugarRush is currently gaining momentum on Twitter with many speculating a ban on the movie ‘Sugar Rush’ and presuming the supposed action as a sign of government’s intention to stifle creativity,” it said.

“The movie has not just significantly increased box office revenues within a short period but has improved our cinematic culture which is sine qua non for attracting the investment we so much desire as a nation.”

Adedayo Thomas, the board’s executive director, took responsibility for delaying the final approval of the movie.

“I, however, take responsibility for the gap in communication and the delay in granting final approval as the temporary approval given for the movie exhibition expired before we could release an official statement due to my preoccupation with extant responsibilities and a backlog of movies requiring approval as a result of the December rush.

“I am currently working with the distributor, producer, director and key actors to grant final approval for the resumed exhibition at cinemas.”

1. Thank you all SO MUCH for the support that our film “Sugar Rush” has received. Unfortunately, due to issues that are way beyond our control, #SugarRushMovie has been suspended from playing in Cinemas. pic.twitter.com/gn7Yi2K64N

2. We are hoping that these issues will be resolved quickly, so we can resume screening the film ASAP.

We did everything within our power and sacrificed a lot to make a movie you’d love and we appreciate the support and incredible demand thus far. Please don’t give up on us now pic.twitter.com/w9Tg5WGwBL

3. Pls stay positive and hopeful with us! We have put so much into this film…Your love and support so far has been amazing!

We are optimistic that the film will be allowed to go back on your screens sometime soon.