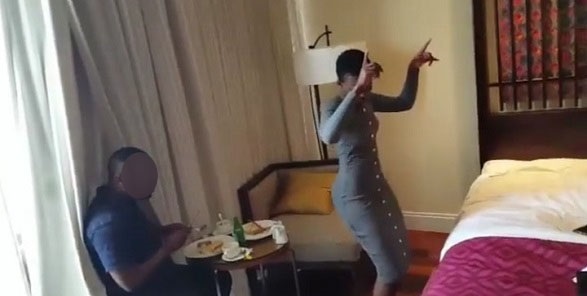 A London-based Lady,Identified as Chantelle Lewis is currently taking the head on social media after she tweeted against, ‘Twerking’.

Chantelle had tweeted that twerking does not look good, reiterating that it’s neither a dance skill, nor does it look sexy or attractive.

“Twerking does not look good. It’s not a dance skill, it’s not sexy or attractive. It’s literally a mating call, it’s screaming please look at me and tell me I’m sexy! Men don’t find that attractive, ask any man if they want their wife/girlfriend twerking and they’d tell you No!”

Twerking does not look good. It’s not a dance skill, it’s not sexy or attractive. It’s literally a mating call, it’s screaming please look at me and tell me I’m sexy! Men don’t find that attractive, ask any man if they want their wife/girlfriend twerking and they’d tell you No!

After her tweets went viral, folks on social media have dragged her to the teeth.

Most social media users are replying her tweets with videos of themselves twerking.

@18ktCock: Twerking has literally been around since the 90s, it’s not new and the whole shaking your bum dancing style descends from some traditional African dances I swear? I get what Ur saying to an extent, but bum shaking dancing been going on hundreds if not thousands of years

@YungTatum: Doesn’t really matter what I think but I agree. When it comes to actual dancing skills and moves…I would say twerking is at the bottom of the list…not much twerking in ballet I don’t think

@bluemiiints: Why this tweet sound like you really can’t twerk so your plan is to abolish it.

Read Also:  “I don’t think you’d ever lose me, my feelings for you won’t change” – Neo promises Vee (Video)

@matt_abstract_: “Mating call” intresting how you use animalistic terms to describe dancing made popular by Black women. You telling on yourself and it’s sad. Seek help.

@kaiserkerfer: I would very much appreciate it if my hypothetical significant other twerked

@GhMuscle_Lover: This tweet clearly makes me realise that a lotta of black people need to start reading up or taking African History and culture courses. We been twerking long before the pink-skins dropped on our continent.

@TweetOrSTFU: This is stupid, because only time twerking is not “attractive” is when blsck woman are doing it, anytime u got a white girl twerking to the beat, nobody is saying it’s not attractive… Foh

@speakmymind2020: Maybe in private but I definitely would NOT want my girl twerking in public or on social media. Not a classy look imo

@EyeDonyell: 1. You can definitely block all of the twerking, you do not have to look at.

2. You do need some type of skill to perform the said dance.

3. It is sexy and attractive in a lot of cases.

4. Men do find it attractive.

@VofDoom: [in hushed tones] And here we have a feral PickMe bird. They’re not exactly rare, having more in common with their cousins, the pigeon but fascinating to behold nonetheless.

HARK! She squacks in anger over a different bird’s mating call. Ironically, that’s THEIR mating call.