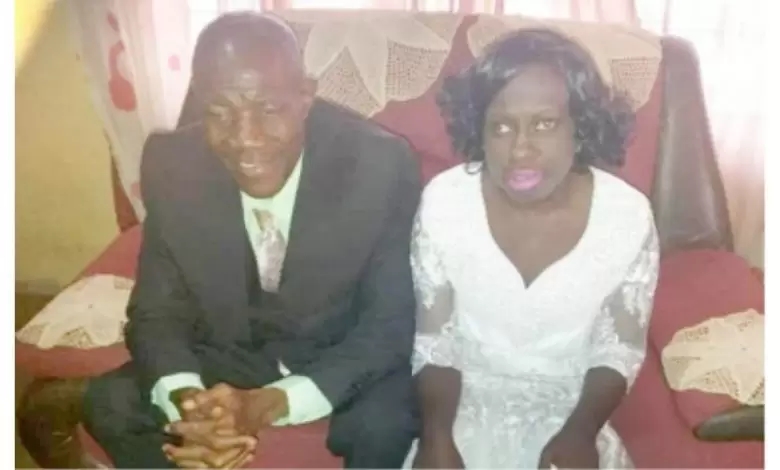 Daily Trust reports that the love birds found each other and stuck together despite discouragement from people who they believed disliked their union.

For the couple, only God could have made it happen for them on February 15, 2020 when they were joined as husband and wife. It was a long walk for love but worth the challenges faced.

“I love her so much because I noticed that she always had soothing words whenever I’m in any kind of problem. When I noticed some special qualities in her, I started wooing her,” Edekere said.

Grace said, “When the battle was hot, I turned down his proposal but when I discovered that those discouraging me from accepting his proposal were in turn suggesting another lady for him to marry, I accepted his proposal.”

Edekere, an indigene of Edo State, and his Idoma wife, Grace, met in 2018 at the Special School for the Blind in Ekiti State where they are both teachers.

Narrating how he lost his vision and where their paths as lovers crossed, Edekere, recalled, “I work with the Ministry of Education in Ekiti State as a teacher at the Government Special School for the Blind. I’m from Edo State. I was born on July 5, 1968. I became blind in 1998.

“I went to St. Mathias Catholic School Lagos after which I proceeded to Government College, Osborn Road in Ikoyi Lagos. I worked with the Nigerian International Bank, Victoria Island, Lagos, and thereafter put in for my ICAN course. It was in the process of becoming a chartered accountant that I became blind.

“I met my wife after she was posted here as an N-Power staff in 2018. I got attracted when I found out that she’s an educated lady and a good woman who can support me. I so much love her because I noticed that she always had soothing words for me whenever I have a problem. When I noticed all these qualities in her, I started wooing her in a bid to marry her.”

He made his intention known to her by formal proposal, stressing his assurance to be a committed husband as he was no longer getting younger.

“As a blind person, it is not easy to get a wife or husband. I told her I was ready to marry her. It took her about eight months to accept my proposal. It was a tug of war because after I proposed to her, some people rose up against our relationship. 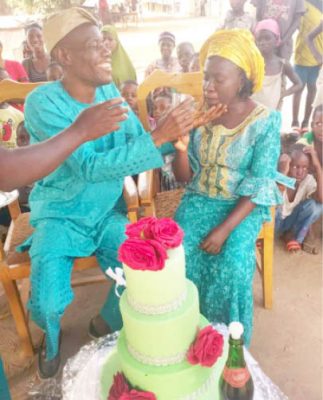 According to him, the journey through courtship was good because they got to know each other better.

However, he explained that there was no opposition to their relationship either from his family or hers.

Edekere, who admitted that two visually challenged people coming together in a marriage would never be an easy task, however posited that part of their training in school had already equipped them on how to do domestic work unaided and independently.

He said, “We were taught so many things. Since I got to know her, she’s been wonderful. She can use the washing machine to wash clothes, she can cook using the gas cooker. She’s simply a good woman and a wife material. Though in other parts of the country, it may be strange seeing two blind people getting married but it’s not new in the south west and the north.

Read Also:  “You can’t get rid of me bi*tch” – Tacha boasts as she shows up at BBNaija reunion (Video)

“Here, you see visually impaired couple with their children. In fact, in the school where we work, some of our colleagues here are married to their blind counterparts. So, it’s not something so difficult or new.”

On her part, the bride disclosed that she was born into the family of Mr. Samuel and Mrs. Josephine Adanu from Adoka Ipole in Otukpo Local Government Area of Benue State in 1977.

“I’m the third child in a family of seven. At the age of eight, I came down with meningitis while in primary school. I attended Our Lady of Perpetual Help Primary School, Ankpa Quarters. I couldn’t go to school for some years after I had meningitis. When the meningitis came up the first time, my parents took me to Madonna Hospital in Makurdi, and from there, I was taken to Teaching Hospital Kano and another private hospital without any success.

“It was after all these that I was taken for native medication and I got cured. The hospitals were just giving me injections and I was always convulsing. When I had the meningitis, I felt feverish and had a headache in school. By the time I returned home, it got worse.

“That night, I felt like throwing up and so rushed outside but on my way in, I discovered that the light just went off. So, I said ‘there’s no light; I need light,’ but they said there was light. That was how I lost my sight till date,” she narrated.

Sequel to her blindness in 1991, at the age of 13, Grace’s father enrolled her at the Child Evangelism Fellowship Ministry (CEFM), a Special School in Otukpo where she did only four years because she skipped some classes.

She then proceeded to St. Ann’s Secondary School Otukpo and finished in 1996 after which she got admission to the University of Jos where she studied Special Education with specialty in Visual Handicap to teach the blind.

Grace said upon graduation in 2012, she secured a part-time teaching job with the School for the Exceptional Children Aliade but the pay wasn’t good so she left and applied for a job at Apa Local Government Council where she spent over two years before her employment was terminated.

She disclosed further, “It was after the termination of my employment that I applied for N-Power job and I opted to work outside Benue for fear that I might not get the job if I choose Benue. So, I got the job and was posted to Ekiti State.

“This is my third year in Ekiti. I teach Basic Science, Health Education and Civic Education. I met my husband already working here. Initially, when he approached me for marriage, I refused because I felt he was advanced in age but on a second thought, I felt that marriage for visually impaired persons is not an easy thing as nobody goes for them because of their impairment.

“What made me accept his proposal was the fact that the same people who did not want us to get married were suggesting other girls for him to marry. I saw envy in all of that and then decided to marry him. I love him because he’s an unapologetic giver, honest, a man of his words and also God fearing.

Grace adviced fellow visually impaired ladies who are not married to toe her path since they have already been trained to cope with their disability so that life can be enjoyable for them because the only thing some men do to blind women is to impregnant and then abandon them in their parent’s houses.

Interestingly, the couple hopes to have three children, God willing, so that they can take good care of them.