A distraught student of the University of Uyo (UNIUYO) has taken to her facebook page to narrate her ordeal after she was allegedly flogged while on her way to meet her family in Cross River State. 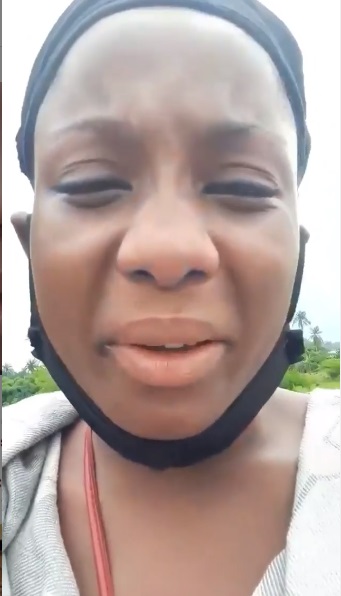 According to the student, the incident occurred at Akwa Ibom State’s border with Cross River state.

The student identified as further revealed that she was only trying to talk to the man in-charge when he allegedly ordered his boys to flog her.

I decided to go home today after the lockdown was lifted, I’m from cross river state Etung local government Effraya. The videos will explain everything. All I was trying to do was talk to the man on the blue native (he seemed to be the one in charge) in one of the videos to explain to him that I am a student that got stocked in uyo and I was trying to get home to my family in Effraya.

I’m 22 and I’m trying to talk to you and all you do is ask the boys around with sticks to beat me up, after a while he came himself and used his whip to hit me several times and also pushed me several times that I almost fell to my face and got some Matks on my back from the whip, all I was trying to do was go home to my parents to avoid me having to die of starvation in a land I know no one but only came to school. I just wanted him to listen to me like he listened to everyone that approached him, but maybe he thought I was too small.

The only picture in my head was his daughter (if he has any) in a situation like this trying to go home to her parents and she’s flogged and humilated. Just because she is a girl and she should not be listened to. I dont know what his name is but hope and pray he finds peace this night for flogging a child that only wanted to go home to her parents to find food and shelter and yes he was letting people cross over. I guess he licked their faces better or they deserved to live more than every other person on this bridge 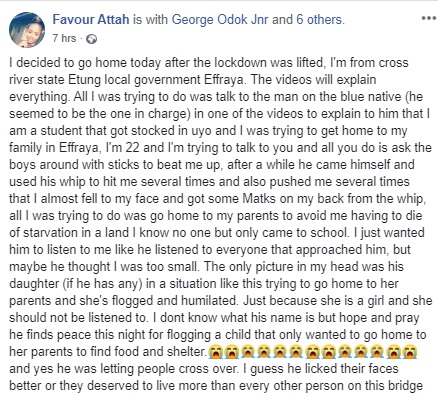