Oluwapelumi Wonder, said to be the wife of a Pastor has won Francis Van-Lare’s ‘indecent proposal’ of spending one week with him in Italy.

Oluwapelumi’s husband is expected to join her in Italy with the sum $2000 he will be getting from Mr. Francis Van-Lare

Francis Van-Lare, relationship counsellor Amara Nwosu’s ex-husband who made the announcement on Facebook, said Oluwapelumi revealed she participated in the contest because someone who wants to sleep with a married woman will not post it on Facebook. 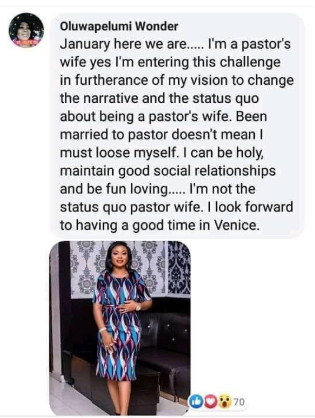 The Indecent Proposal . I have to close the thread early as contestants are being bullied . We have a winner . The Pastor’s wife Oluwapelumi Wonder.

I keep telling all of you to think as if there is no box but you will not listen . The husband will be given $2,000 as promised but he must use it to buy a ticket to Venice ITALY and be thought how to spice his wife by my Italian friends who are experts in romance . While there, take her on a gondola ride , give her breakfast in bed , wine and dine her , go dancing , shopping etc and my expectation is that this trip will take their marriage to the next level .

I never said I will do all these for her myself , I said she will get all those spice but did not say by who .
If I had posted a free trip for couples everyone who thinks inside the box will jump in . Oluwapelumi has her own business and happily married and not hungry but she and her husband do not think in the box . To quote her she participated because someone who wants to sleep with a married woman will not post it on facebook so she thought as if there is no box .

Of course I will travel with them and pay all expenses and bring my Cinderella along too . 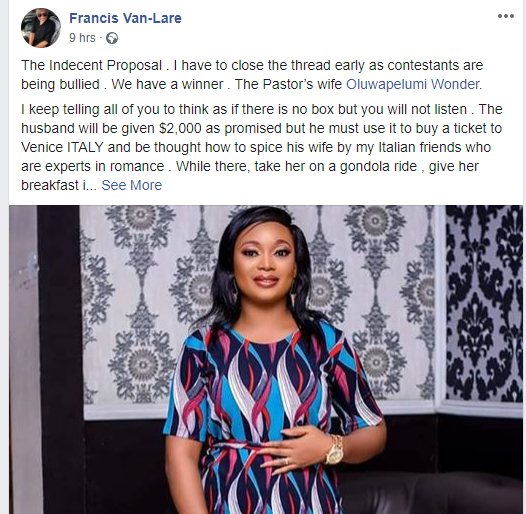