A Nigerian nurse in the United States who recovered from the dreaded Coronavirus, has opened up about her ordeal before recovering from the virus. 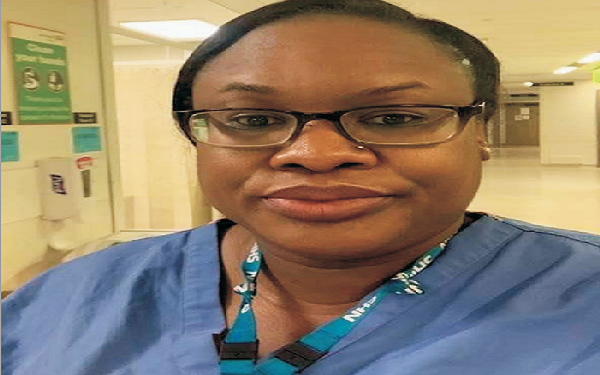 May Toba, a Nigerian United States-based nurse, mother of two and quite elated survivor of the Coronavirus, has relived her wrestle and recovery from the deadly disease.

She starts by saying,

People who are able to go to the hospital on time stand a better chance of surviving, but the thing is that they are asking people to self-quarantine because since it’s a virus, it will run its course and go by itself. Where it becomes complicated for many people is when they now have underlying illnesses like diabetes, asthma, cardiac problems, and pneumonia. I am diabetic, that’s what made mine worse.”

According to May, her Covid-19 ordeal all started with a temperature…

“I was having a bit of temperature; I own a thermometer, so I checked myself and found that it was 38.4. Usually, temperature is supposed to be between 35 and 37.5. I checked the first day, took paracetamol; I kept monitoring it daily and it kept increasing.

“The next day, I decided to go shopping with my son. I didn’t isolate because, to be honest, I was in denial that it could be Coronavirus. I thought it was common cold and general body weakness. By this time, people in London were panic-buying. Everybody was rushing to buy tissues and other things. So, I went shopping with my son, so that if London shuts down over the weekend, we would have food at home.

“I live in South-East London, so as we got to Woolich, I was short of breath and also couldn’t walk long distance without stopping to sit somewhere.

When we got home, I asked my son to offload the things we bought, that I needed to go to the hospital because I was having signs of COVID-19.

I drove down to the hospital where I work. I work in Accident and Emergency and we are the front-liners. Everything comes through our doors.

“On getting there, my colleague said to me: ‘May, you should know better. These are flu-like symptoms. Why don’t you just stay at home for seven days instead of coming to the hospital?’ I told her I wasn’t feeling right at all and that if I was, I wouldn’t come to the hospital.

“Being that I work in the hospital, they rushed me straight, took my samples, and did all my blood tests and x-rays. The COVID-19 test takes 48 hours before the result comes out. They started diagnosing it through the patient’s x-ray. When they do your chest x-ray, they can see from your lungs if there’s fluid in the lungs.

They detected fluid in my lungs and saw that it had started collapsing already. The doctor immediately told me that he’s going to intubate me and place me on a ventilator to allow my lungs rest. I agreed and was injected. That was the last I knew of what happened until four days later.

“According to my colleagues, I was incubated and sent to ICU. I woke up four days later and was told the water in my lungs had already dried up and the blood test had become better. They did another swab and it was negative, that’s how I was discharged.

When she was asked if she can trace how she got infected, May said,

“On the 13th, I worked with COVID-19 people. My matron and I were trying to see if it was on that shift I contracted it. I still think it was that shift; because that day, we had about five COVID-19 patients and we weren’t properly dressed at the time, because the WHO hadn’t told us what to wear.

It was the week I was sick that they now decoded that anybody attending to patients with any form of respiratory illness should gown up.

“I would say my symptoms took five days to show because I worked on the 13th and was admitted at the hospital on the 19th. But, you never can tell with this virus. I could have contracted it on the train on my way to work; it could have been brought home from school by any of my children. But I’m grateful to God that he didn’t allow COVID-19 kill me while trying to save others.

Asked if she had her children tested, May answered in the negative,

“They didn’t have to be tested because they don’t have any underlying illness and they have not shown symptoms. The government said there is no need for them to be tested. Sadly, a 13-year-old died in London yesterday and he didn’t have any underlying illness. He’s the youngest that has died in London so far. Every day, the death toll is keeps rising.”

Read Also:  Sex worker fights client who accused her of having a smelling vagina (video)